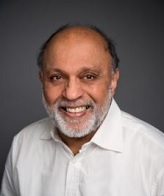 He is of Sri Lankan origin and traces his ancestry to the Hadramut in Yemen and is a descendent of the intrepid sailors who pioneered the spice routes to the Far East in times gone by.

Accompanied by a colleague of what was then known as the Ceylon Air Academy, he landed in New Haven on the south coast of England in 1953, from Dieppe in France.

This short sea journey was preceded by a six month overland trip from Sri Lanka hitch hiking a substantial part of the journey across ten countries in South Asia, the Middle East and Europe. Their original plan was to travel on to Canada and join the Canadian Air Force but having wearied of the overland journey they decided to join the Royal Air Force instead. He served in the RAF for ten years as a technician working on the early squadrons of jet aircraft introduced into service during the cold war.

On leaving the RAF in 1962, Hajj Fazlun worked in a factory near Preston and immediately became involved in trade union activities as a shop steward for a multi-racial work force. This was during the early days of immigration in the UK and factory floor relations between workers and management were tense. The potent mix of new immigrant labour and insensitive management ended up in a walk out by the former in 1965. This was the first industrial dispute in the country overlaid by race and recorded in Paul Foot’s book the Red Scar Story. Hajj Fazlun says that this experience politicised him and the fork in the road he found himself in led him to abandon the engineering career he had his heart set on and take the road that led him to serving people.

After spells in University and as a social worker for Lancashire County Council he was recruited to the Race Relations Board (RRB) in 1968 which subsequently merged with the Commission for Racial Equality (CRE) in 1976. These original equal opportunities organisations set the scene for the eventual formation of the Human Rights Commission in the UK. Hajj Fazlun was the investigating officer for the first ever case to be brought to court under the provisions of the 1968 Act.

Working for these semi-government agencies further politicised Hajj Fazlun.  He discovered in his twenty-three year stint with these organisations that racism, poverty, debt and environmental degradation had common origins and that the same forces that thrust these problems on the human race were still at work resolute in their pursuit of domination. He developed a deep interest in matters relating to global debt and poverty and he sensed that the agencies associated with these issues were going through a metamorphosis. They appeared to be changing into a seamless movement, taking on environmental concerns as they came to the fore, OXFAM being a good example of this. Hajj Fazlun morphed as these organisations changed and committing himself to the environmental movement didn’t need a conscious decision on his part. He says that it was more a case of being willingly ‘sucked-in’ by strong currents and it looked like the right way to go.

He found himself at another fork in the road in the late 1980’s when he felt challenged at a meeting of environmentalists. Participants at this gathering were seeking common solutions to a problem seen as dwarfing all others in the whole of human history and he was asked what Islam had to say about the environment. He could not respond with a credible answer and he found the Muslim voice in this forum weak. He had a sense that Islamic teaching on the environment and its protection had much to offer the world, of which awareness appeared to be lacking amongst Muslims themselves. There was an obvious knowledge gap that needed to be filled and at this point he decided to research this himself and opted to enrol for a master’s degree in Islamic Studies at the University of Birmingham in 1990.

He was fifty eight at the time and his first term at the university convinced him that this was no part-time matter. The issue was the big one of our times, if not of all time and it needed a commitment to match it. He discovered that Islam was inherently environmental in scope and it was a belief and value system deeply embedded in the natural order. It was a puzzle that Muslims have allowed this knowledge to lapse. Unravelling this should throw some light not only on how and why we were disconnected from these teachings but also on what caused it. The following year he resigned from his senior position in the Commission for Racial Equality after twenty three years service. The choices in front of him were a further seven years service behind a desk until retirement or working on something that was fresh and dynamic and open to exploration. The second option was compelling.

Hajj Fazlun was invited in 1992 by Martin Palmer, the head of the International Consultancy on Religion Education and Culture (ICOREC) to edit Islam and Ecology. This was one of a series of faith and ecology books that was being sponsored by the World Wide Fund for Nature (WWF) and he was able to draw contributors for this volume from the growing network of scholars and activists he was beginning to build. This initiated a decade long partnership with ICOREC and WWF, which brought him in touch with people from other faiths and traditions involved in this work. He was also invited to chair an international workshop set up to discover common ground between all the major traditions which took place in Japan in April 1995. This workshop was attended by experts from faith-based environmental organisations and the outcome of this was the Ohito Declaration for Religion Land and Conservation (ODLRC) named after the location in which this gathering took place. This was part of a wider initiative held under the auspices of WWF, ICOREC and the Mokito Okada Association (MOA – a Japanese spiritual organisation). An extension of this gathering reconvening in Windsor Castle, England, a month later created the Alliance for Religions and Conservation (ARC). ARC was to be the hub of faith based environmental activity and one of its foundational projects was the promotion of the ODRLC. Having chaired the workshop that produced this declaration, Hajj Fazlun was invited to promote it. He thus slipped into the role of a roving ambassador for ARC and conducted this work for over five years as its director of training.

What followed was a period of intense travel until the funding came to an end in 2000. Hajj Fazlun was meeting a wide range of people and the two truths he says he discovered for himself about this affair was that the human race was faced with a common threat of unprecedented proportions and we are the threat itself. These experiences increasingly led him to feel that there was something profoundly unreal about what we have now come to loosely define as modernity and some if not all the answers he was looking for would come from an understanding of this.

Hajj Fazlun says that what became clear to him during the course of all this activity was the need for an organisation that expressed this work in specifically Islamic terms. This need for a focal point was highlighted by the steadily increasing demands for advice and direction from students at one level and information from organisations ranging from NGOs to academia at another. His original experiment produced the World Islamic Foundation for the Environment (WIFE) which did not go down well in certain quarters. Then the Islamic Foundation for Ecology and Environmental Sciences (IFEES) emerged as a possible choice of name that expressed his aspirations reasonably accurately. It wasn’t long before recognition as an international NGO came in the form of invitations for speaking engagements and the offer of writing commissions, and most importantly to conduct the first Islamic environmental ethics workshop in Zanzibar in 1999 that transformed that scene so dramatically to the good. IFEES was officially registered as a charity in 1994 and the work that began tentatively in the mid 1980s was consolidated into this new organisation. It has now established itself as perhaps the only internationally recognised body articulating the Islamic position on the environment and also giving practical expression to it.

Hajj Fazlun is now succession planning and is optimistic that he is leaving this work in good hands and that IFEES will receive well deserved support as awareness of its endeavours and intentions increase.

To Allah ˹alone˺ belongs the kingdom of the heavens and the earth. He creates whatever He wills